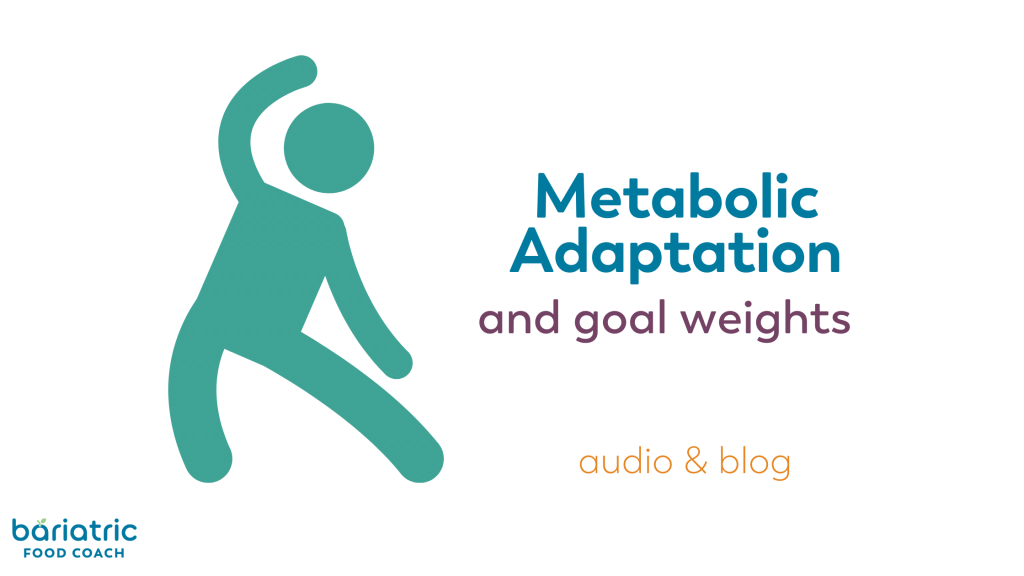 Prefer to listen? Play the clip below for my audio clip reading this blog post!

What are realistic expectations for weight loss after bariatric surgery?

A member emailed with a big question

This past week I received a wonderful question in my inbox. I shared my thoughts with the member and also shared it to our closed Facebook group for Bariatric Food Coach members.

The question and answer received so many likes, I wanted to post it here to share here.

I had someone tell me the reason I was regaining weight after my second year after sleeve surgery was metabolic adaptation. What is this and is this a possibility? I can not lose my last 20 pounds and have gained about 20 back. Thank you for your input.

What is ‘metabolic adaptation?’

Let’s take that fancy word and boil it down a little. Metabolic is a big word describing the fueling process in the body. Metabolism is your body processing food into energy at a cellular level.

Adaptation is a fancy word for change.

Metabolic Adaptation is when the body has change in the process of changing food into energy. Bariatric surgery changes a lot of things about food and therefore metabolism in the body.

Early out of surgery, there is a lot of change in metabolism. You might call that metabolic adaptation!

Portion sizes are small, metabolism is high and hunger hormones tend to be low. (Check out the full members video course on Hunger after Bariatric Surgery for more on that fascinating topic.)

We often call this the honeymoon year. There is a lot of wonderful benefit in the early post-op metabolic adaptation.

This is also the time to get the most out of your first year! When hunger is lower or more easily managed, it is a great time to really build the structure and lifestyle to set you up for success when hunger might come back or portion sizes might grow. Both of those things are still more manageable years after surgery than prior to the surgery.

Beyond the first year metabolic adaptation

This leads us to the question that was asked. The member asking is seeing weight regain past the second year of surgery and was told it was due to metabolic adaptation.

We can use the phrase metabolic adaptation once again here because changes do occur beyond the first year. Portions naturally increase a little (try not to be scared of that, it’s not all bad!) and hunger may creep back up.

The metabolic rate (how many calories are burned) of a patient would be lower over a year after surgery by the very nature of that person weighing less.

When you eat less, the body will burn less and in time the metabolic rate will decrease from eating smaller portions.

Also, it requires more calories to move around a body that is heavier. A patient who started at 300 pounds will have a higher metabolism than over a year later when he or she weights 190 pounds. They have been eating smaller portions for over a year and they are moving around less of themselves all day.

Can you still lose weight after the first year after surgery?

The biggest question and concern of all.

Surgery is a tool that, when used properly, can help you manage the disease of obesity. Arguably more than any other tool out there.

That means beyond the first year, you can still use the tool! It may take getting back to basics and it may go more slowly, but be encouraged that there is no need to feel total despair if your honeymoon year is over.

A note about goal weights

Emails I receive often make a reference to how much more weight someone wants to lose to be at their goal weight. You’ll notice that in this particular email as well.

Goal weights can be tricky and I think we could all use talking about them more.

Bariatric programs may (or may not) give you a goal weight or an estimated weight based on your height for your to reach.

The tricky part is that our bodies don’t always work like textbooks and we don’t live in a vacuum, we live in the real world with different bodies. There seem to be a million different things that could impact someone reaching a specific target weight.

There is also a theory about this called the ‘set point theory’ that would argue the body is going to level off where it’s going to. One might say a the body has a set point before surgery which is why you ‘gain and lose the same 20 pounds’ because your body gravitates back to a set point.

Surgery could be said to be an opportunity to re-set your set point. When you stay the course the best you can on your post-op eating plan, you can get the most out of your surgery. Ideally, settling at a new set point. What that set point might be is hard to tell.

Sometimes it boils down to doing your best to live a healthy post-op lifestyle and letting go exactly how it will pan out on the scale.

It could also be said the main goal of a weight loss surgery is to no longer be obese (when the BMI is under 30). Many will want to lose more than that number but it’s worth celebrating! Many research studies will define a weight loss surgery as a success when the patient has lost half the weight they were overweight. (If someone was 200 pounds overweight and they lost 100 the surgery would be a success in research terms for many studies).

How to keep metabolism going strong 💪🏽

Finally, let’s wrap up this loaded conversation with some practical take home messages.

I mentioned when you eat less and weigh less, your metabolism goes down and this would make someone years out from surgery possibly have a lower metabolism than when they were pre-op.

I have good news. Maintaining healthy and practical habits will prevent metabolism from dropping further and can help you maintain a good metabolic level for your body which allows you to maintain the weight loss in the years to come.

These three areas can make a big impact for better or worse in metabolism. Continue your healthy post-op eating plan of lean proteins and vegetables and stay hydrated to help your body process food into energy in the most efficient way it can!

If you’re a current member I recommend checking out a video course! Check out Getting Back on Track or Hunger and Bariatric Surgery.

Not a member? Join my email list and enjoy a free video course “How to Get the Most Out of Weight Loss Surgery” or join as a member today!