I mentioned on Facebook yesterday that of all the cauliflower crust recipes I’ve found, none of them have really been worth the time.

I’m excited to say…this one finally was. Wahoo!!!

Now the reason I haven’t felt it’s worth the time, is because it is more time consuming than most of the recipes I make. I like to keep dishes to a minimum and get things together in a half hour or less. So when I read a recipe that calls for a blender, a skillet and baking for 25 minutes…and then another 5 minutes…I start to get a little glossy eyed. But I just knew there would be a good one out there. I just knew it!

This recipe I found on a blog called Eating Bird Food. Her pictures were so enticing I had to give it a try for myself. Mine was modified but only slightly. Add your toppings as desired but I used mushrooms, white onion, ground turkey, yellow squash and more shredded mozzarella.

The result? It was WORTH IT! I had a few more dishes than normal and it took a little while to create, but it was beautiful coming out of the oven and very, very tasty. Mr. W agreed it was delicious and we finished the whole thing off. It was only vegetables and protein so we felt great afterward!

***Warning*** I feel it’s important to warn you that cauliflower does not smell good. When I opened my Vitamix blender, a wave of something that reminded me of the inside of a pumpkin reached my face. Also, our house had an interesting smell after baking the crust. It’s not so bad that you don’t want to eat it and it does go away the more the pizza cooks. I just wanted you to be fully wanted so you don’t think your cauliflower has gone bad :)

2. Prep the baking stone or sheet. I used my Pampered Chef Stoneware Bar Pan. It’s been used so much I don’t need to add any oil. You may need to spread some olive oil on the surface of whatever you use to bake it.

3. Remove stems and leaves from cauliflower and roughly chop it. Add to a food processor or high powered blender (I have a Vitamix which is AWESOME.) Blend/process it until it starts looking almost like a paste. And be prepared for the funky smells…..

4. Scoop the mixture into a microwave safe bowl. I used my Pampered Chef Large Micro-Cooker…just be sure to put something over the top to cover it. Microwave about 6 minutes.

5. Meanwhile, brown the ground turkey. I added salt, pepper, oregano and Italian seasoning. Put to the side for now. Start chopping veggies if you haven’t already.

6. Once cauliflower is done, add the rest of the crust ingredients to the bowl. Egg, garlic, cheese and seasonings. Mix together well until to starts looking like a dough ball. Add to your baking stone/sheet and spread out with the back of a spoon or rubber spatula. 7. Bake in 400F oven for 25 minutes. Once it’s done, take it out and put your oven to broil. Add all your toppings (marinara sauce, veggies, meat, cheese) and put under the broiler for 5 minutes. Remove from oven, let cool and serve. 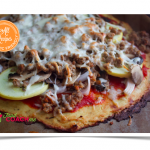 *Serving sizes on the recipes are not necessarily "bariatric sized" portions but are "traditional" portion sizes.