What is “Hot Ham and Swiss Chicken Breasts?” – really, it’s a spin off a classic Chicken Cordon Bleu.

Traditionally Chicken Cordon Bleu is a dish with meat wrapped around cheese. How most have come to know it is chicken, pounded thin and wrapped around ham and swiss, then breaded and fried.

Essentially what I did here was take the flavors you might see inside a chicken cordon bleu and reversed them to cut the breaded and fried portion of the dish and save time.

However, it felt like such a different dish than Chicken Cordon Bleu that in the end, I decided it was ham and swiss chicken breast! But now you know the story behind the recipe :)

How I set up my cooking process

Typically I’m a fan of a one pot dinners but I did notice with this dish it was easier to work in batches.

I cut my chicken breast in half length wise and THEN again cut it in half to make a thinner piece of chicken. This left me with six pieces of chicken.

I had six pieces of chicken in a bowl with the mustard mixture. Then the hot skillet. Then I had a covered dish.

I went ahead and put the slices of ham on a smaller heated skillet while the chicken cooked. It seemed to save time and it was easy to wash that skillet. Sometimes I debate and would rather not use an extra dish but this time it felt more efficient.

I then sliced the tomato and layered the plates – chicken with swiss, ham, mushrooms and tomato slices. It’s unique but a fun twist on chicken breast! 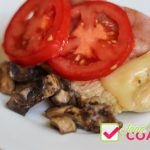 Ham and Swiss Chicken with Mushrooms and Tomatoes

This recipe makes 4 servings. Each chicken breast will be approximately than 2.5 ounces, plus toppings.